I’ve mentioned before that I don’t just do home decor projects at home – I enjoy cooking and I like eating even more.  And the fella works on his feet anywhere from 8 to 14 hours a day depending on the season, so he can eat a LOT.  I try to make home cooked meals at least five nights per week (try), since its cheaper than eating out and the man needs sustenance.  Anyway all of that is to say…  I’m back today with another recipe that is full of flavor and spice! 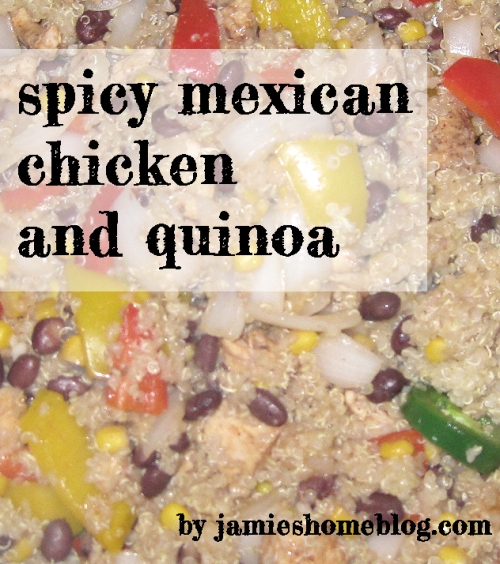 Disclaimer: this recipe isn’t for wimps.  If you don’t like spicy food, cut the jalapeno and dial back the white and cayenne peppers… But don’t tell me about it.  It’ll just depress me. 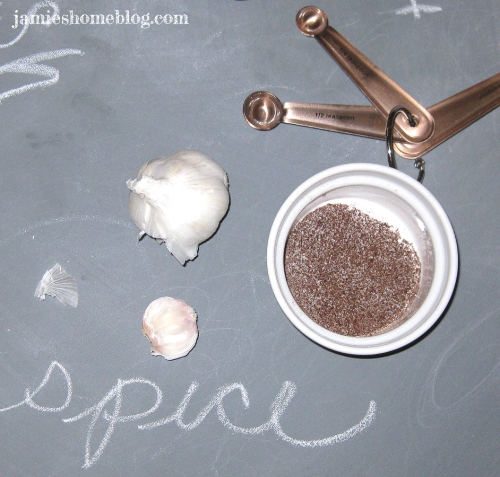 The above quantities feed the fella and I for maybe three whole nights but we have serious appetites.  You could probably manage to feed eight people with this amount of food.  I love making this much early in the week, though.  The fella and I work long hours and between my full time job and working on this blog, it’s easier if I don’t have to cook every night.

Tip: mix your spices together ahead of time.  I use the above mixture of spices on like 82% of our meals.  We love spicy Mexican-style dishes and that mixture is perfect for chicken, beef and even shrimp!  If you don’t want to mix your own spices, pick up a packet of taco seasoning from the salad dressing aisle of your grocery store – I’m pretty sure it’s the same ingredients!

To start, cut your chicken breasts into one-inch cubes.  Pop them in a bowl with a drizzle of olive oil and your spice mixture and stick them in the fridge while you get busy with your quinoa.

Quinoa seems intimidating, but it’s super easy to cook.  Almost the same procedure as rice.  TheKitchn has an informative post that I followed when I first started cooking with this hearty and healthy little grain.  I toast mine a little longer than most websites say; I just prefer a toastier taste.  This particular time it was about long enough for me to do some sick air guitar while Zeppelin / Black Dog played.  You needn’t know how often this type of behavior happens at my house.  Hint: it’s frequently.

Anyway, once your quinoa is toasted and simmering in a pot, chop your veggies if you haven’t already.  If you have, pat yourself on the back for being prepared.

Your burner should be on medium for this part.  Once your skillet is hot, drizzle olive oil and dump in your chicken. 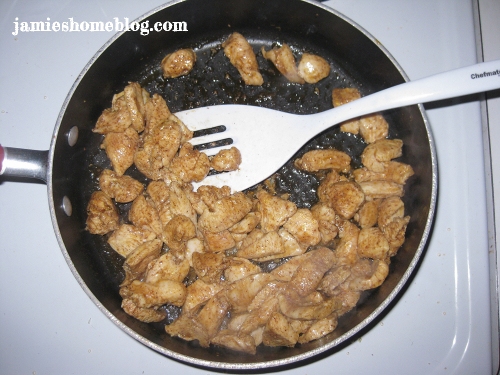 Once the chicken is almost fully cooked (5-6 min), toss in your frozen corn and black beans.

Two or three minutes later, toss in your veggies and minced garlic.

Another two or three minutes and your quinoa should be ready to go in too.

Mix it up a bit and then turn off the heat.  Friend, you’re ready to eat now, aren’t you?! 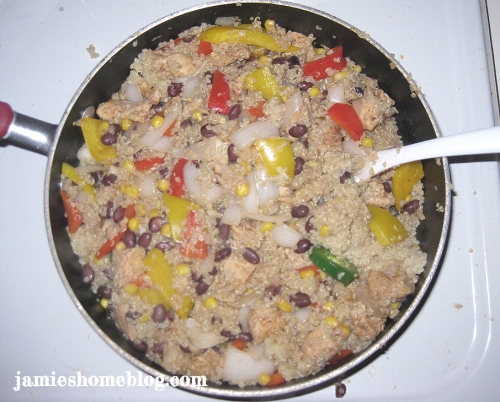 Spoon some in to a bowl with your favorite toppings (mine are shredded cheese, sour cream, fresh jalapenos and cilantro).  In the winter I usually squeeze in a few pieces of jalapeno cornbread with it.  Recommend serving with your favorite cerveza or a refreshing margarita!

What do you guys like to cook with quinoa?  Do tell…

If you follow me on instagram, you may know that I’ve got several projects going.  Among those, one involves fabric: 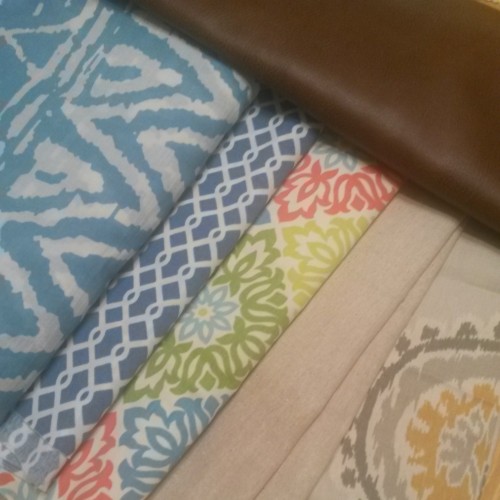 And another one involves sanding:

I hope to have the delicious deets posted here soon, but in the mean time….

Jessie at Fact or Pin-tion graciously invited me to write a guest post for her blog.  Her format is to test all of those crazy life hack pins to see which ones are legit and which ones are duds – fun, right?

Peep the post on her blog to see the results!

Have a great day, lovies!

Yeah I cook too.  I know I normally post about home projects here, but another thing I do at home (a lot) is eat.  I recently got a wild hair to make scratch beer mac n cheese and holy beer boil, Batman.  It was good. 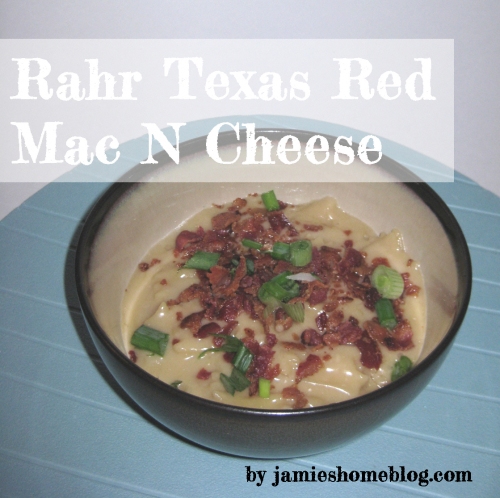 Before I get to the nitty-gritty I need to address something.  I am a lover of craft beer, local beer, trying new beers, drinking my favorite beers….  If you’ve never tried a Rahr beer, obtain some by any means necessary.  This, like all of my other posts thus far, is NOT sponsored by Rahr or anyone else.  I just happen to be a huge fan.  They’re local to my area – Fort Worth to be exact – and I’ve never tried a single Rahr I didn’t like.  Not once.  Their brewery tours are ridiculous.  Three beers and a tour around fancy machinery?  Yes, I’ll have that pleasethanks.  Lets get to it, shall we?

A google search told me that amber lagers pair well with white cheddar (I drink my Rahr with any food), so after a tasting where the fella and I ate a chunk of cheese and then sipped on two of our favorites, we both decided that Texas Red was the winner.  Buffalo Butt was a close second, though.  Time for happy cooking.

The first thing you want to do is cook your noodles.  In beer.  I poured one beer and 12 oz of water (just fill your empty bottle) into my pot. 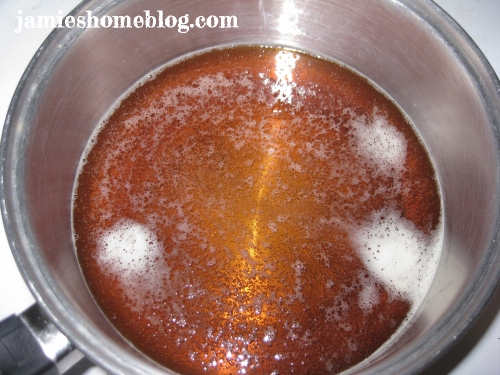 When beer boils, it does crazy things.  Keep your heat around 7 or 8 on your stove to avoid this: 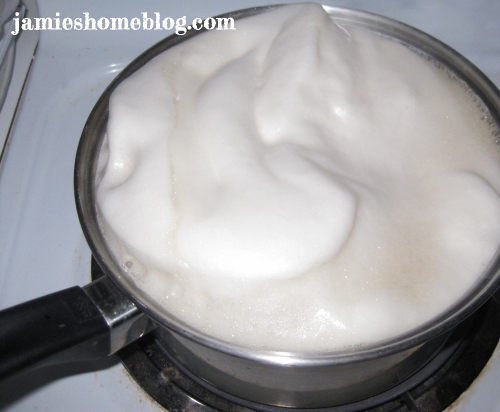 When the beer comes to a boil, toss in your noodles.  They seemed to take a tad bit longer to cook than when you just cook them normally.  If I were bathing in beer, I’d probably hang around longer too.  Whenever the noodles are done to your liking, drain them and set them aside.

Meanwhile, make your double boiler.  Fill your other pot with water – enough to get good coverage under your bowl but not so much that it will spill over when its boiling.  Set your bowl on top of the pot and set your heat to around 8.

Put your butter (half of a stick, remember) in the double boiler and let it melt down.  It goes faster if its in chunks or grated.  While its melting, pour in half of a bottle of Texas Red.  Drink the other half if you please but do it responsibly folks.  Just because I drink while I cook doesn’t mean its safe.  Do as I say not as… You get the idea.  I don’t have pictures of that part so here’s a Texas Red. 🙂 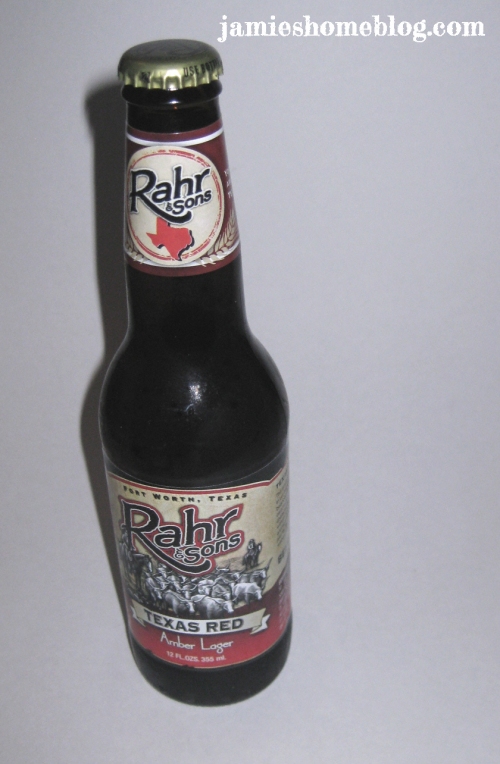 Your water under your glass bowl should be boiling at this point and hopefully your beer and butter mixture is decently hot.  This is when you add in your cheese, bit by bit.  Give it a good whip with the ol’ whisk after each oz or so that you add.

I also opted to add about a half tsp of garlic powder and a tsp of white pepper.  I like the taste of white pepper better than black, but really you can use whatever spices you’d like at this point.  I don’t recommend adding salt to this recipe.  The white cheddar and gruyere are rich and salty on their own. 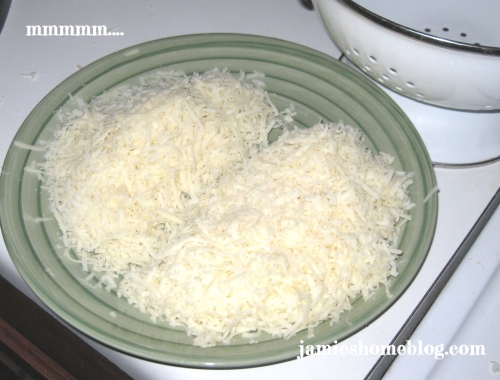 Once your cheese is liquefied (that part takes a bit of patience), you may want to add a tsp or two of flour to thicken the sauce.  I added only one, because I like my mac and cheese just slightly on the soupy side.

Then, my friend, put your beer noodles in your bowl of beer cheese and toss to coat.

Put your beer mac n cheese in a bowl, top it with bacon crumbles and green onion, pop open a Texas Red, chow down and drink up.  Oh and remember how I said I used 8 strips of bacon?  Don’t do that.  That’s too much bacon for this dish.  I hate myself for saying that, because really there’s never too much bacon, but it’s the truth. 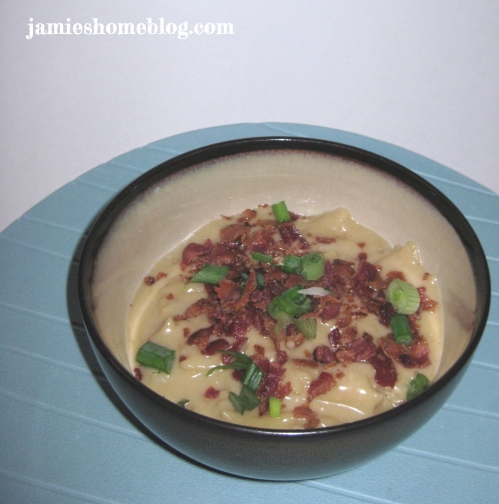 A food photog, I am not, but it tasted 1000 times better than this picture looks.  It’s definitely really rich, and more of a hearty winter food than spring, but it was fun to make and damn delicious.

So friends, what is your nearest, dearest craft beer?  What about a dish that calls for your favorite frosty?  Do tell…